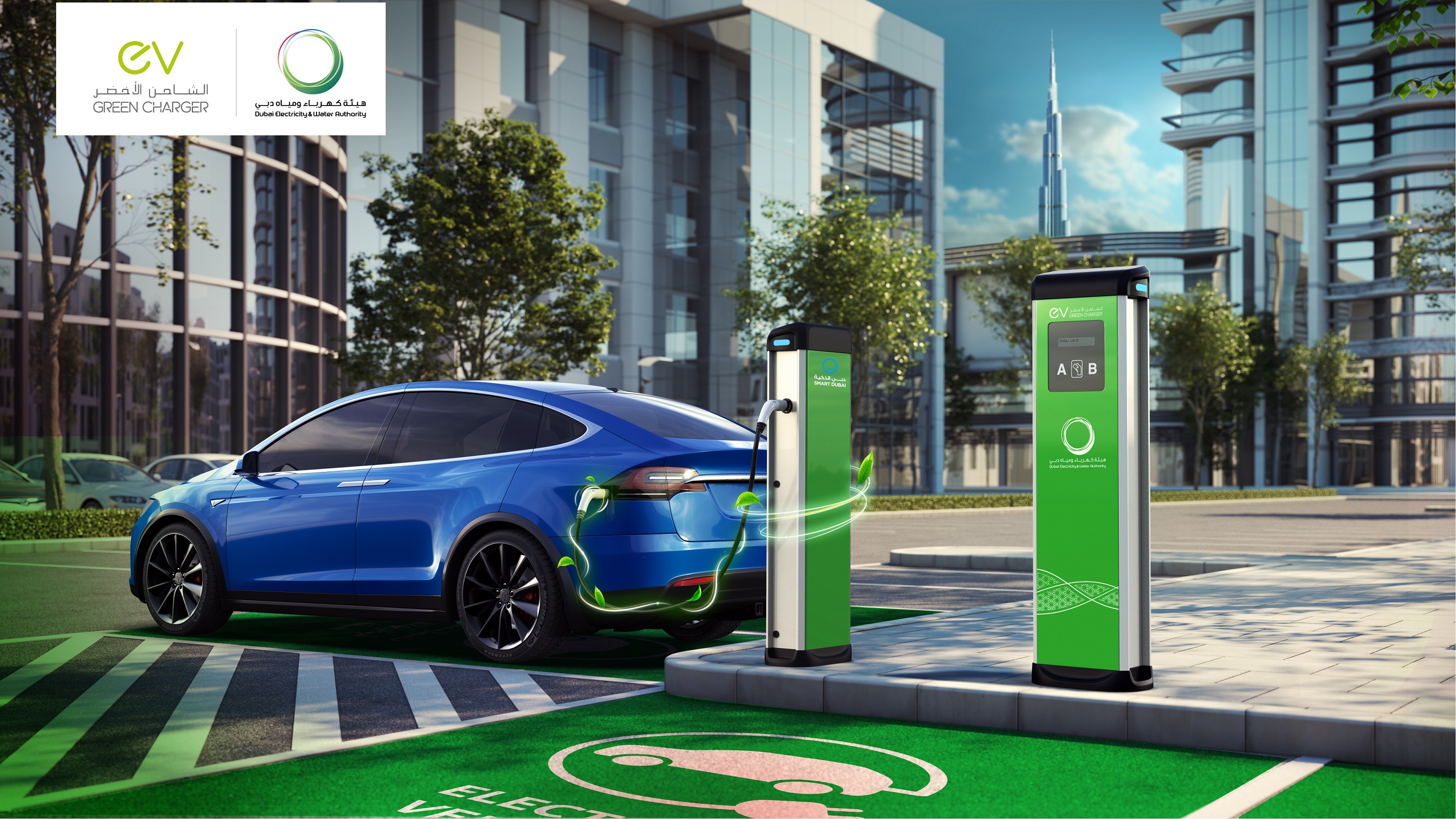 Dubai Electricity and Water Authority (DEWA) has allowed all EV owners to use Green Charger services when they register their electric vehicles (EVs) at the Roads and Transport Authority Dubai (RTA). DEWA instantly creates an EV account for them when they register at RTA. This enhances the pioneering partnership between DEWA and RTA which is based on seamless digital integration. The new service enables EV owners (commercial and non-commercial) to charge their vehicles at more than 300 DEWA EV green charger stations across the Emirate.

DEWA will create a new EV account for customers and notify them online about the account details, to make their journey towards sustainability and green mobility easier. EV users can charge their electrical vehicles when they register the vehicle at RTA, using DEWA’s smart app through scanning the QR code placed at public green charging stations. They can also use DEWA’s EV Green Charger card, which will be delivered within three working days after registering in the Green Charger services. DEWA has ensured free charging for non-commercial EV owners until 31 December 2021. Customers can register for EV Green Charger account via DEWA’s website and smart app.

“We work to achieve the vision of His Highness Sheikh Mohammed bin Rashid Al Maktoum, Vice President and Prime Minister of the UAE and Ruler of Dubai, to make Dubai the smartest and happiest city in the world and consolidate its position as a global capital for green economy and sustainable development. DEWA harnesses the latest Fourth Industrial Revolution technologies as well as disruptive technologies to achieve the Dubai Carbon Abatement Strategy, which aims to reduce 16% of carbon emissions by 2021. Carbon emissions dropped in Dubai by 22% in 2019, two years ahead of the strategy’s target. DEWA collaborates with public and private entities to encourage sustainable mobility in the Emirate and to reduce carbon emissions from the ground transport sector,” said HE Saeed Mohammed Al Tayer, MD & CEO of DEWA.

“Protecting the environment, optimising the use of energy, and reducing carbon emissions are high on RTA’s agenda. We are prioritising these elements in implementation of the initiative of His Highness Sheikh Mohammed bin Rashid Al Maktoum, Vice-President and Prime Minister of the UAE and Ruler of Dubai (Green Economy for Sustainable Development), UAE Vision 2021, and the Dubai Clean Energy Strategy 2050. The initiative will motivate the use of environmentally-friendly vehicles and sustainable transit means,” Said HE Mattar Mohammed Al Tayer, Director-General, Chairman of the Board of Executive Directors of the Roads and Transport Authority.

“RTA has endorsed an array of initiatives advocating the spread of electric vehicles such as the exemption from RTA’s fees at the time of vehicle registration renewal, exemption from the one-time payment of Salik tag, and the dedicated parking spaces painted in green for electric vehicles. RTA had launched several projects and initiatives to promote environmentally-friendly transport such as the trial run of electric public buses, hydrogen fuel-powered vehicles, and power-saving streetlights. RTA succeeded in converting 50% of Dubai Taxi fleet to environmentally-friendly vehicles and seeks to raise this rate to 100% by 2027,” added Al Tayer.

“From inception, RTA has adopted effective planning and construction of innovative roads and transport projects in support of integrated mass transit systems in the Emirate. It was keen on proving advanced transport network and infrastructure on par with the best worldwide, and offering smooth, convenient and highly efficient mobility means across the Emirate. Such efforts support the foundation of businesses, influx of trade and tourism and the economy besides reducing carbon emissions, protecting the environment, and improving the living environment of residents in line with RTA’s vision to become ”The World Leader in Seamless & Sustainable Mobility,” said Nasser Abu Shehab, CEO of Strategy and Corporate Governance Sector, RTA.

Marwan bin Haidar, Executive Vice President of Innovation and the Future at DEWA, said that this step is part of DEWA’s efforts to enrich the customer experience, save their time and efforts as well as consolidate their contribution to sustainable development by encouraging them to use hybrid and electric vehicles.

Free charging for non-commercial vehicles until 31 December 2021, is only at public stations. Commercial EV owners in the private and public sectors pay 29 fils per kilowatt hour.