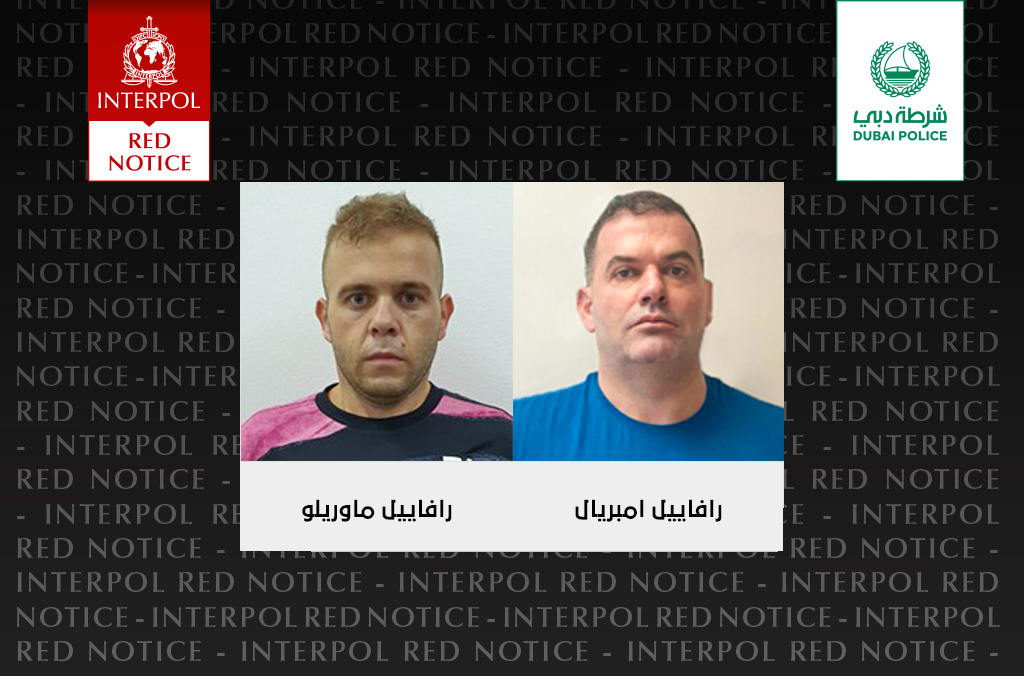 The Dubai Police have recently arrested one of Italy's most wanted criminals, Raffaele Imperiale, an alleged kingpin of the organised crime syndicate 'Camorra' which is involved in drug and weapons trafficking crimes across international borders. The Force also arrested Imperial's right-hand man Raffaele Mauriello, who is responsible for plotting and executing murders and assassinations using unlicensed firearms.

Both Imperiale and Mauriello are wanted by Italian authorities and Interpol who have issued Red Notices against them.

Dubai Police apprehended Imperiale after they discovered his true identity despite the fact he was impersonating someone else using a fake identity under the name of 'Antonio Rocco'.

Imperiale made sure to use different cars to hide his daily movements, he also chose to live in an isolated home with an overlooking spot to monitor those who approach him. He intentionally had avoided registering a precise address to mislead authorities and remain in the shadows.

Raffaele Imperiale was born and raised in the Italian city of Naples. He’s been a member of the Italian 'Camorra' organized crime syndicate since his early childhood until he became one of the most infamous drugs kingpins in Italy for his criminal history. Imperiale is considered as one of Italy’s most dangerous and wanted fugitives by the Anti-Narcotics Directorate in Stabia, Naples.

Constant Efforts
Lieutenant General Abdullah Khalifa Al Marri, Commander-In-Chief of Dubai Police, said the arrest of Raffaele Imperiale and Raffaele Mauriello is another achievement to the fruitful cooperation between Dubai Police and international law enforcement agencies as per the directives of  His Highness Sheikh Saif bin Zayed Al Nahyan, Deputy Prime Minister and Minister of Interior, who has always directed the UAE's forces to maintain strong, active, and vital communication channels with the world's police agencies, and Interpol to tackle transnational organised crime.

Close Surveillance
Expert Major General Khalil Ibrahim Al Mansouri, Assistant Commander-in-Chief for Criminal Investigation Affairs, said the arrest of Imperiale and his right-hand man came after they had been placed under close surveillance by a team of elite investigators from the General Department of Criminal Investigation aided with the latest artificial intelligence technologies available at the Dubai Police Criminal Data Analysis Centre and ‘Oyoon’ surveillance programme.

True Identity
Brigadier Jamal Salem Al Jallaf, Director of Criminal Investigation Department (CID) at the Dubai Police, praised that the exceptional efforts of all investigation teams who were able to reveal the true identity of Raffaele Imperiale and to foil his deceptive methods in staying low and hiding behind a fake identity.

“He was using fake identity under the name of 'Antonio Rocco' and used multiple cars to hide his daily movements,” “Imperiale chose to live in an isolated home with an overlooking spot to monitor those who approach him. He intentionally had avoided registering a precise address to mislead authorities", Al Jallaf added.

The Raid
Al Jallaf said they placed Imperiale under surveillance round the clock and for a whole week.

“Backed with the latest AI technologies, our officers kept track of Imperiale’s movements and revealed his deceptive methods in evading detection” “At the Zero hour, a specified task team raided the house and arrested Imperiale with high professionalism. The team also seized large sums of cash, luxury watches and some valuable possessions including paintings", Al Jallaf added.

Al Jallaf further explained that Dubai Police has transferred Imperiale and Mauriello to the Public Prosecution who would determine the mechanism for their extradition per existing international agreements.