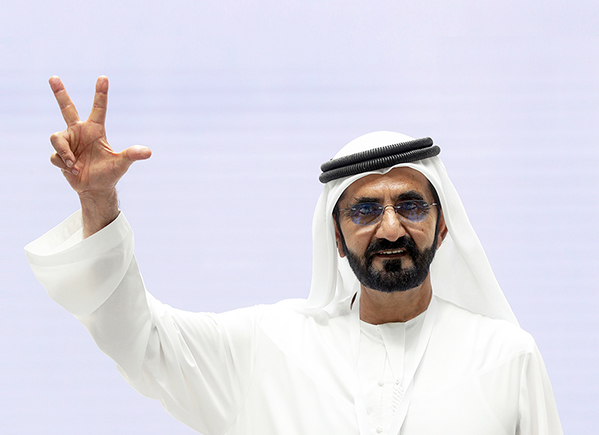 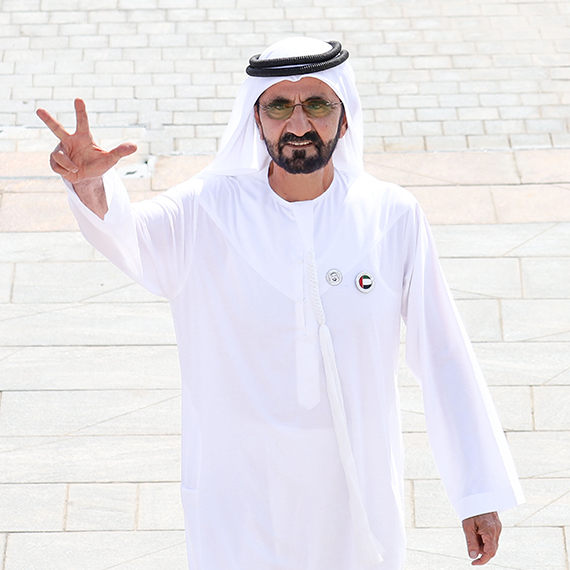 Following his assumption of office as Prime Minister, Sheikh Mohammed established a new programme to further promote excellence in government and enhance public services. He rolled out his basic principles for sustainable development including fostering innovation, engaging youth, developing human capital, investing in education and scientific research, establishing good governance in the UAE government sector and promoting the growth of a knowledge-based economy. He launched several unique initiatives targeted at raising the UAE’s international competiveness, paving the way for a new phase of economic, social and cultural development. His efforts and dedication helped the UAE achieve top global rankings in many areas.

Sheikh Mohammed’s ambitious vision is considered the catalyst for most of Dubai’s pioneering projects and initiatives. His vision is integrated and comprehensive and is focused on sustainable development. The people’s happiness and the UAE’s prosperity are His Highness’s top priorities.

In addition to being an inspiring leader and progressive manager, His Highness Sheikh Mohammed is a prominent poet. He is widely acknowledged as one of the finest exponents of Nabati poetry, a colloquial form of Arabic poetry deeply rooted in the culture of the Arabian Peninsula, which shows the natural creativity of the Bedouins. Sheikh Mohammed has written several classical Arabic and Nabati poems that are highly appreciated by Arab critics and poets and well received by the public. His work has been translated to several languages.

In 1994, Sheikh Mohammed and his brother Sheikh Maktoum bin Rashid Al Maktoum established Godolphin, a thoroughbred horseracing stable that quickly emerged as a force within the sport. Over the years, Godolphin horses have competed in the most prestigious racecourses in the world and produced some of the world’s strongest horses.

Sheikh Mohammed’s personal international record as an endurance rider is quite impressive. On 25 August, 2012, he secured a historic double at the FEI World Endurance Championships where he won the individual gold medal and led the UAE squad to the team gold. On 20 June, 2012, he won the 160-km European Endurance Race in Italy. Sheikh Mohammed also won many regional and international endurance races and championships.

His Highness Sheikh Mohammed’s responsibilities and engagements have not hindered his humanitarian activities, which he places a high priority on. He has made charitable donations to many projects beyond the borders of the UAE. He has also launched many philanthropic campaigns to help underprivileged people and the victims of conflicts and natural disasters. In June 2014, Sheikh Mohammed launched UAE Water Aid, a drive aimed at providing clean drinking water to five million people around the world. UAE Water Aid later developed into an international research and development organization that had the mission of transforming lives by improving access to clean water. Sheikh Mohammed also announced a US$ 1 million prize to encourage research on sustainable solutions to water shortage across the world, including the use of solar energy to desalinate and purify water.

In 2003, Sheikh Mohammed established the International Humanitarian City in 2003, which has grown to become the world’s largest and busiest logistics hub for humanitarian aid with 60 NGOs and commercial entities based there.

Guided by a sound belief that education is the most effective tool to break the cycle of poverty and advance economic growth, His Highness Sheikh Mohammed launched Dubai Cares in September 2007. Dubai Cares is a philanthropic organization that works to provide children in developing countries with access to quality primary education.

In September 2008, Sheikh Mohammed launched Noor Dubai, an international initiative aimed at treating and providing health services to people suffering from treatable blindness and visual impairment in developing countries. Over the years, Sheikh Mohammed has launched many philanthropic initiatives to help disadvantaged people across the world.